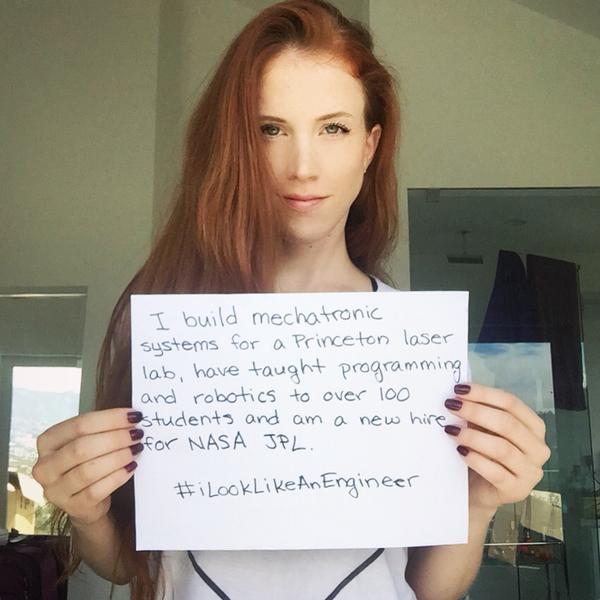 #ILookLikeAnEngineer started out as a campaign meant to help recruit new employees, but female engineers looking to put an end to tech industry stereotypes have turned it into a powerful social media phenomenon over the last seven days.

Thousands of female Twitter users have posted images of themselves holding a piece of paper that describes the kind of work that they do – engineering, coding, robotics.

Many of them also stress that their “girlyness” does not have an impact of their work as they described themselves as proud lovers of makeup, the color pink and stuffed animals, or show that their pregnant, but quickly add a job description revealing what their achievements have been and how capable they are.

It all began last weekend, when Isis Wenger, a 22 year old engineer who describes herself as a “self-taught engineer, extreme introvert, science-nerd, anime-lover, college dropout”, wrote a post on Medium about her participation in an advertising campaign for the company she works for, OneLogin.

The campaign made many people question whether or not Wenger was a real engineer, a fact that took her by surprise as she herself doesn’t pay much attention to ads and didn’t expend such a strong reaction from others either. She gave a statement saying that “People generating discussions about whether or not I really was a platform engineer for OneLogin were also rather shocking”.

She also encouraged women reading her Medium post to use the hashtag #ILookLikeAnEngineer if they identified with her message and shared her feeling. And according to Topsy, a popular social media analytics website, about 50.000 posts using the above mentioned hashtag reveal that many female engineers share her point of view, disbelief and frustration.

The social media phenomenon brought a lot of attention about gender diversity and sexism in fields such as engineering, math, science and technology.

It’s not the first one either, as a comment made by Nobel prize winner Tim Hunt got a similar reaction out of female scientists just a couple of months ago. They took to Twitter and Facebook, adopting the hashtag #DistractinglySexy to show the world how “glamorous” their day to day tasks were and how “sexy” their unflattering hazmat suits were.

A 2011 survey conducted by the Computing Research Association showed that while women have a fairly minor presence in tech heavy or scientific fields, there’s still enough of them in the work force to make these types of world views inappropriate. In 2011, more than a quarter (26%) of the STEM employees (science, technology, engineering, math) were women.

But these fields are far from favoring women. Tracy Chou, software engineer for Pinterest, gave a statement informing that the tech industry isn’t doing anything in terms of “increasing diversity or building a more inclusive workplace”.

She started looking at more than 200 different companies, investigating how many female software engineers each of them has, and found that most of them have less than 50 percent (30%), and 30 percent (30%) of these companies have no female engineers whatsoever.

However some steps are being taken as both Google and Pinterest have launched programs meant to increase the number of women working in these fields.