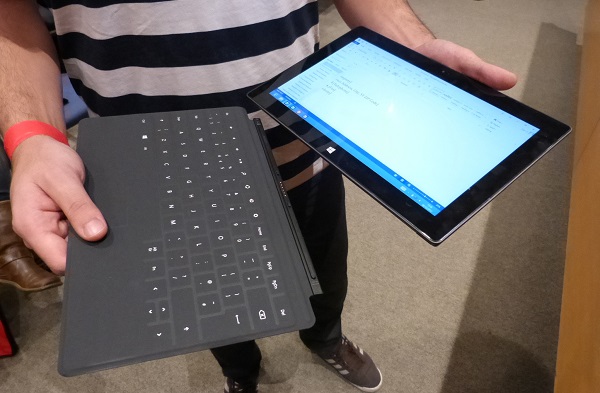 After the release of the Surface Keyboard last fall, Microsoft decided not to stop here, so it will bring a new keyboard version, together with a mouse. However, the new launch has a special feature which will make you forget about passwords – it is equipped with a fingerprint sensor.

Microsoft gave up on the Surface brand and called the new gadget the Modern Keyboard. Also, it will be available for pairing with a broader range of devices. As compared to Surface, which could be paired only via Bluetooth, the Modern Keyboard comes with both wired and wireless connection.

In terms of design, the Modern Keyboard is not much different from Surface, except for being a little slimmer and having an aluminum chassis. However, the biggest change comes with the fingerprint sensor. This will allow users to log on to Windows 10 by using Windows Hello, so they won’t need any more passwords.

The sensor enhances the security features, since it is placed in disguise on the keyboard. It sits next to the Alt key, on the right, and it looks just like a regular key. Therefore, you are able not only to unlock the device with your own fingerprint, but also to keep it hidden from prying eyes.

While using it wirelessly, the Modern Keyboard needs two AAA batteries. This should offer you a battery life of about 12 months. The gadget comes with a lot of useful features for a suitable price. As expected, the keyboard is not really cheap, since a fingerprint sensor can never come at a bargain.

Therefore, Modern Keyboard should be available at a price starting at $130. It also comes with a mouse, with the only change being the name (Modern Mouse), so it is barely a rebranded Surface Mouse.
Image Source: Wikimedia Commons